Talmage is a yappy force of anger and sarcasm whose gut reaction to being given an order is to do the exact opposite.

After his wizard school was destroyed and his magic was taken from him, Talmage invented an entirely new form of spellcasting using ink and spite. Revenge on his attackers became his only goal, though the most he accomplished was petty vandalism.

Lately, he can be found working with a clown resistance group to overthrow an evil megachurch. He’s also dealing with realizing he might be in l*ve? He isn’t sure which of these is worse.

Spite fuels him!! Even against his best interest, Talmage will often ignore advice or orders because he simply wants to make his own decisions in life. He also tends to speak without much forethought and can be rude to his friends in favor of making what he might think is a light joke. He’s working on this.

He’s a fairly independent person and believes he can accomplish most things on his own. He doesn’t like directly asking for assistance; except when it comes to money, which he feels no shame asking for when surrounded by people with rich bank accounts.

When flirting, Talmage generally has no tact and will just go for it when he’s interested. He’s used to night club flings and one-night stands, so he doesn’t have much experience actually getting to know or (god forbid) dating somebody.

Talmage is a bright magenta tiefling with lavender accenting via his horns, tail, and freckles. His horns, tail, and nails are all rounded where they may typically be sharp on someone much cooler than him. (The same could be said for his facial structure, though I’m not the best at describing that sort of thing.) He seems to make up for his soft features with a sharp personality.

His feet are padded, though his hands are not. His hair is likely a shoulder-length mullet, but he probably only wears it down at night. Otherwise, he wears it in either some kind of balled ponytail or a braid. He trims his eyebrows and fills them in dark.

Working with ink and being generally messy has caused his closet to contain almost exclusively blacks. (It’s also hard to wear any other color when you’re bright pink.) He has an interest in fashion and prides himself in his appearance, but mostly dresses like he’s on his way to a gay bar.

Circling his neck is the white brand forcefully inflicted on him after the Vale attacked his school. It is a source of shame, so he typically covers it with a neck accessory or high collar.

For a while, Luci spent some time training across the world with his new dad. During this, the two of them still talked every day via a pair of sending stone rings and a magical hand mirror. After their reunion, the two returned to being close friends … though a little awkward due to the realities they were both forced deal with over their time apart.

Once upon a time, Talmage joined a circus and was nice to their ominously-silent clown mime. Then the clown turned out to be a talent scout for a secret resistance organization. Also an asshole. Needless to say, Talmage did not make the cut.

Their relationship consists of Talmage pranking him during class and Gwynfor banishing him to another plane of existence, though lately the two may have found an inkling of respect for one another. (Maybe.)

Aurabri and Talmage were roommates during the 3 years they attended Brighthaven together. While there was never any compassion between them, they were always very codependent. Despite spending most of their time bickering, they were definitely best friends during their time together.

Aurabri resides at the resistance sucking up to their new favorite professor.

When Talmage had first found Brighthaven, he was turned away by one of the teachers and told to come back when he was older. Stubborn, Talmage kept pushing year after year. Eventually Radious grew a soft spot for Talmage and took him in as a student.

After their school was attacked, Talmage assumed Radious died along with the rest of his classmates – until they stumbled into each other and Radious explained he had been working for a secret resistance group the whole time.

As a child, Talmage only had one friend. Warm and friendly, Nicollet was the perfect balance to Talmage’s negative demeanor. Together they explored different creative hobbies; from baking to sewing to painting.

Nicollet stayed behind when Talmage left to pursue his interest in magic. When he returned, she was nowhere to be found. Years later, Nicollet turned up stealing from the very resistance Talmage had allied himself with.

Solomon was introduced to Talmage early-on as a family friend, close with Talmage’s parents but only visiting sporadically. The guy was nicer to Talmage than his own parents were and didn’t treat him like the rest of the city did, so he looked forward to Solomon’s visits. He would bring Talmage out to do things and wouldn’t be ashamed to be seen with him in public.

Talmage hasn’t seem him in a long time.

Though the two have yet to officially interact outside of a handful of frenzied combat encounters, Talmage knows these things about Hector:

– He hates the Vale
– He’s a dramatic, stuck-up asshole
– He might be Talmage’s brother 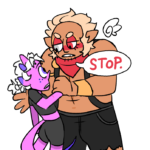 Being a sphinx, Bishop has the power to command anyone to do anything – with certain limitations. Talmage wants to know what those limitations are.

Aside from being an interesting experiment, Bishop reminds Talmage of what it was like to have someone big and strong looking out for you. He would never admit it, but Bishop can be a great source of comfort for him.

He also wants Bishop to fuck his brains out, but that’s probably not on the table anymore.

A lot happened the night Talmage’s school was attacked. Amongst the Vale soldiers was Vivienne – but she chose to let Talmage free when given the opportunity.

Now she travels with Talmage and friends to undo the damage she did working for the bad guys for so many years.

Ares and Talmage get along well – they both appreciate sarcasm and floating weaponry. Ares being a vampire was also a big point of interest for Talmage, until Ares lost control and attacked him because of it.

They’ve talked about it since, but Talmage won’t be giving Ares a snack anytime soon.

Both being crafty and inventive, Talmage and Rocco collab on various projects together. Thanks to Rocco’s gullibility, Talmage can often convince him to go ahead with potentially dangerous experiments.

When it doesn’t directly benefit him, however, Rocco’s innocence is mostly just irritating. 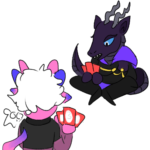 Raja and Talmage’s relationship consists mostly of making offhand, gossipy comments about their enemies and allies.

Upon meeting her, Talmage treated Raja just like everyone else – a bit rudely. Upon learning she was actually a princess, he continued to treating her exactly the same.

The earliest memory Talmage has is of the color purple.

As a kid, he was kept home due to his parents fearing their tiefling child tarnishing the public’s opinion of them. He wasn’t kept secret, but they certainly didn’t flaunt him around. Only a handful of people were ever truly nice to him as a child, one being another tiefling who lived on a nearby orchard.

When not at home, Talmage was with his best friend Nicollet. They were friends for years and bonded over their insecurities and struggles. Together, the two discovered a hidden building on the outskirts of town that turned out to be a secret wizarding school. Being too young to safely attend, they were turned away – but Talmage was stubborn, spending the next few years returning to its location and demanding entry.

Finally old enough, Talmage attended Brighthaven – one of the few secret wizarding schools hidden around the country. These institutions were kept secret from the Vale – a strict anti-magic religious organization that influenced a large part of the country.

Despite being in the ideal environment, Talmage was not a very good student. He slacked off and ignored the curriculum in favor of working on personal projects instead. These “personal projects” typically involved taking the current coursework and pushing its limits, usually in dangerous ways. He abused school resources he shouldn’t have access to and caused a decent amount of property damage during his time there.

Eventually, Talmage developed his own form of spellcasting by channeling his passion for a craft through symbols, as opposed to the traditional wand and component pouch. As a frequent doodler and graffiti artist, Talmage was already drawn to the feeling he got when leading ink across paper. Harnessing that and applying it to his magical studies became his new hobby.

Technically-speaking, Talmage uses Calligrapher’s Tools to cast his spells. Concentrating on a spell involves protecting the life of the ink – if concentration is broken, the ink probably dissipates or smears. These are a few examples of how he casts his spells:

After his school was discovered by the Vale (thanks to a certain white-haired kiss-ass) it was quickly destroyed and its students and faculty were either killed or captured in the chaos. Talmage managed to escape, but was left feeling lost, betrayed, and angry. Right before his escape, he had been branded – something that caused him great pain when he tried casting his traditional wizard spells. Slacking off in class paid off, however, and he found a way to bypass it. The unique magic he had slowly been developing was different enough to slip through the brand’s restrictions.

Upon returning to his only other known place of refuge, Talmage discovered his childhood friend Nicollet was nowhere to be found. Not wanting to return home, he began roaming around, looking for ways to remove his brand and get back at the organization that gave it to him.

A few years later, on his way to being arrested, Talmage was picked up by the Rockfort Circus – a group of performers disguising their magical origins as simple parlor tricks. This led to his eventual partnership with a secret resistance organization aiming to stop the Vale and the damage they were inflicting on the country.

He was conditioned to believe that the magic he could do, as well as his very existence, was inherently evil. After bowing his head for too many years, he grew rebellious and bitter towards the organization that repeatedly beat him down.

thanks, bastards!
god he probably spent so many nights in holding cells lmao

beachboy
I SWEAR TO FUCKING GOD I’LL TURN THIS CAR AROUND, SHUT THE FUCK UP

i don’t trust u anymore
is this referring to the vale as a whole or just aurabri’s betrayal? who knows

see you at your funeral
I HOPE YOU’RE DOING FINE ON YOUR OWN!!!!! bitch

meat bag
everybody try to play it square, follow the rules, but i don’t care

years of war
just know, mine is a hand to hold, take back what the kingdom stole

black me out
fuck off, etc

machine
you don’t know who i am or what i have been through, so don’t dare tell me what i should and shouldn’t do

piranhas club
if you gotta scream until your voice breaks i say do it, and if you gotta punch your dad in the face i say … think about it … do it

kokomo
i’ve been wasting all my time, used to care but never mind, fireballs out of my eyes burning down your temple

newest to oldest
fics currently do not have content warnings – browse at your own risk!

★ feelings are stupid and they don’t exist – dee
talmage/luci

★ its not gay if its fake dating – jay
talmage/luci

there’s no frogs in this one – emi
talmage/luci

eye for an eye – charlie
talmage/luci