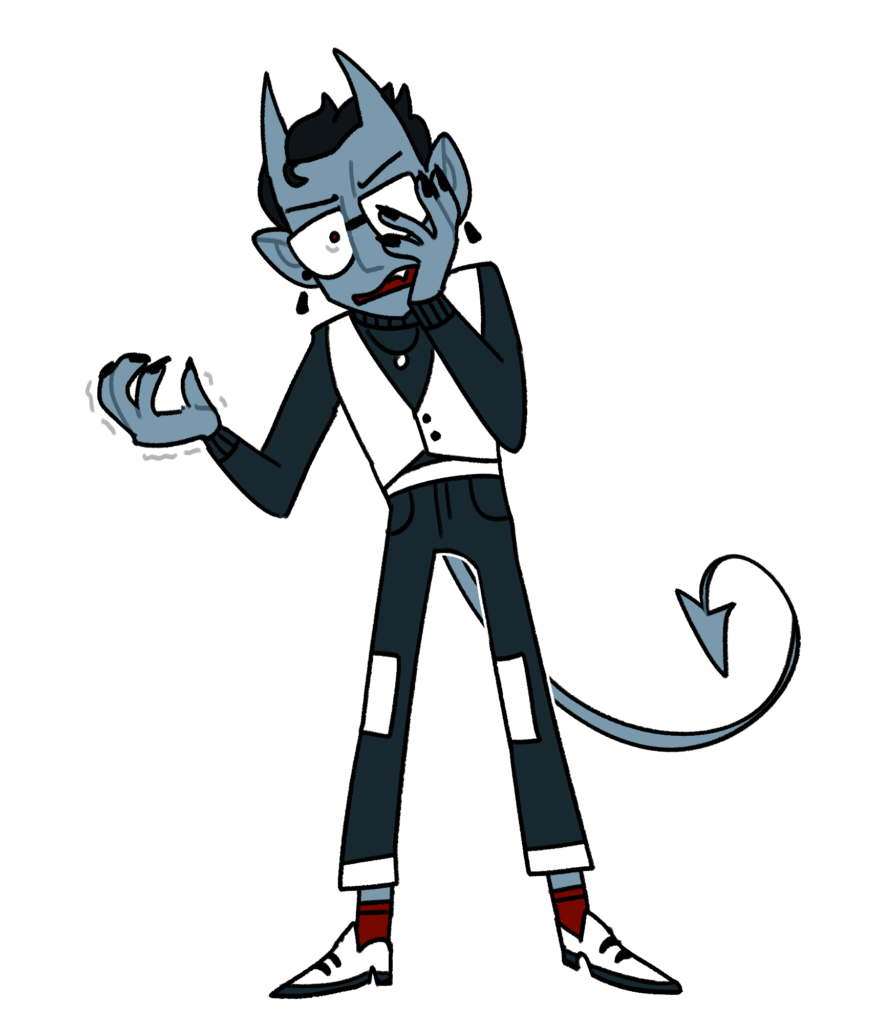 Once an antisocial art student, Levi’s life was ruined the day he was attacked by a vampire on the way home from critique. Instead of killing him, however, the vampire offered to “make a deal.” Unsure what that meant, but not keen on dying just yet, Levi agreed – and became the vampire’s warlock!
He was not expecting the agreement to turn him into a vampire, too.
Months later, after trying (and failing) to cope with his new lifestyle, Levi decided he’d had enough. Ditching his hometown and the creepy guy stalking him, he traveled to Blackstar Academy, hoping someone there knew enough about necromancy to reverse his undead state.

Levi uncomfortably exists in the space of needing to be noticed and never wanting anyone to look at him. Outwardly, he may look confident – but pull back the curtain, and Levi a ticking bomb of frustration and anger waiting to blow.

Raised to not rely on others, Levi finds forming relationships very difficult. Just as he expects no help from others, he rarely extends his own to anyone else. something something here

Recently becoming dhampir has only worsened his temper and fear of intimacy, afraid of what others will think of him when his secret is discovered.

Appearance is very important to Levi, so he goes out of his way to keep himself clean and presentable, and his wardrobe stylish and expensive. You will never catch him wearing a pair of sneakers.

His hair is black, typically styled back, and he has trimmed sideburns. Glasses almost always sit on his large nose, and his canines are abnormally sharp – even for a tiefling. His skin is a pale blue, desaturated due to his state of undeath, and he probably has a light English accent that I’m too embarrassed to do.

If one thing is obvious, it’s Levi’s hatred for Ludo.

Levi does not want to speak with Ludo, to receive mail from Ludo, to be showered in lavish and expensive gifts from Ludo.

But Ludo seems to believe their lives are intertwined, are connected in such a way that he cannot bear to leave Levi alone. So he stalks his new warlock, hoping that one day Levi will grow to accept their unique bond. 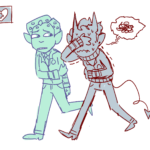 Despite Io confiding in Levi about his questionable source of magic, the two seem to be the most emotionally-distant pair in the group. Being on similar wavelengths, Levi and Io make sure to give the other space when space is needed – but this has resulted the two being in the dark about each other’s struggles.

Levi does not trust Cazlan, Io’s mysterious magical benefactor – and while Io is sure to not trust Ludo in return, he has yet to actually meet Levi’s so-called guardian. 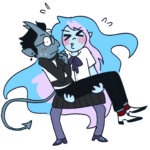 Coming from a family of spirit mediums, Delta has always been surrounded by death. Her affinity and love for necromancy makes her a hilarious foil to Levi’s blatant disinterest towards it, despite being newly-undead himself.

After discovering Levi’s dhampir status, Delta has only barely attempted to hide her desire to study him. 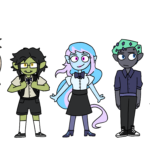 Camrose’s presence is both a comfort and a pain for Levi. Their large stature does wonders for helping him feel safe and protected, yet their connection to the divine makes his undead skin crawl.

Despite only wanting to help, Camrose often finds themself unable to assist Levi when he is in deep trouble; or worse, they even find themself harming him further.

Despite being polar opposites – warm and cold, radiant and necrotic, angelic and demonic – the two seem to have a lot more in common than originally thought.

Sometimes interacting with Amadeus reminds Levi all too much of himself when he was younger – a little socially-awkward and incredibly easy to make fun of.

Levi is hoping he can steer Amadeus away from any potential bullying, but he’s not going to stick too much of his neck out for the kid. 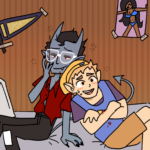 When Levi turned to Ghost’s aid after being transformed into a creature of the night, he hadn’t expected Ghost to make things worse.

In retrospect, maybe he should have.

Despite his contributions to Levi’s own personal hell, Ghost remains a stable comfort in Levi’s life, and has even gone along with letting Levi drink his blood. Ghost just wants to help a bro out! 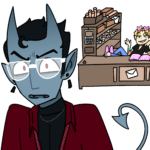 Nurse Paradise is a grungy slimy disgusting little man, and Levi doesn’t believe the medical school diploma hanging on his wall is legitimate in the slightest.

Paradise took Levi’s blood to study and implies to know something about him, but learning more involves … talking to him. And being in the same room as him. And Levi is not going to subject himself to that unless absolutely necessary.

The importance of independence was drilled into his head from a very young age, so Levi struggled with forming relationships most of his childhood, as well as into his adult life.

newest to oldest
fics do not have content warnings – please browse at your own risk!