Salem! Salem is … Salem is … what is Salem? You aren’t sure, and you’re a little afraid to find out.

Salem is a giddy little freak with absolutely no tact or grace in social situations. They will say the most whack shit you’ve ever heard with a smile and then cheerily wait for your response. It’s almost as if they … enjoy making others feel uncomfortable?

When they aren’t skeeving out everyone around them, Salem spends their time glued to their boss’s side, making him uncomfortable instead.

Cheerful and bubbly, Salem might seem like your best friend … unless you say something that doesn’t sit right with them, and their tone will shift instantly. This shouldn’t be much of a concern, though – they’re rather open-minded, even to things that might skeeve out a normal person. Their positive attitude can sometimes be misplaced and they generally disregard the mood of the room, even if read properly. The comfort of others is not something Salem is often concerned about.

If anything is important to them, it’s work performance. They do their best to uplift everyone on the team, believing that positive reinforcement is an important key to success. In the same breathe, however, they may easily tear into their own contributions, not seeing themself as a necessary asset. This can lead to making self-sacrificing decisions at the expense of their group and boss.

Tall and lanky, Salem covers their lithe figure with layers of clothing. Their closet consists of jester-like frills and billowy sleeves. They loom over almost everyone close to them, though their bad posture makes it less intimidating.

Their dark complexion is lightly freckled, and their hair is scraggly and haphazardly tied up. (When down, it’s just past shoulder-length.) They have short hair danglies, and strands are often in their face.

Bright blue eyes hide behind their glasses and they have pretty eyelashes! They don’t wear makeup, but have a natural, bishounen beauty to them. They are almost always wide-eyed and smiling … and if they aren’t, something is horribly wrong.

Down their back runs a tattoo of a white snake – though it seems to be missing some elements to it.

Leader of the Gilded Talents, magical patron, and the object of their obsessions; Salem owes Orev a great deal. If asked, they would tell an elaborate story of how the two of them met, ending in how Orev heroically saved their life.

Orev hates Salem. Orev is very open about this. But Salem can’t really blame him for disliking them! After all, they are sort of useless – but Salem has a duty to fulfill and is determined to fulfill it!

A small, albino viper gifted to Salem by Orev. (Affectionately named by Salem.) The snake can usually be found hiding somewhere inside their clothing and functions as their magical familiar. 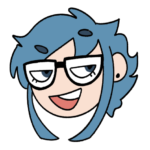 Salem’s opinion of Anjay fluctuates wildly. As a fellow member of the Gilded Talents, Anjay technically works under Salem. Anjay has also made it very clear he intends to take Salem’s job from them.

Salem finds this both hilarious and threatening. While they admit Anjay would be a much better team leader, the thought of him working closer with Orev infuriates them.

Currently, they are “declared rivals” and are attempting to work together for the benefit of the organization as a whole. This does absolutely nothing to stop them from constantly snipping at each other. 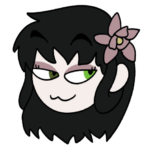 Surprisingly persuasive, and not just because of the time they went feral and slashed Salem to unconsciousness! 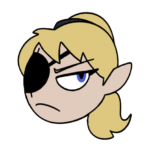 Plays with her food well! Salem enjoys watching Kyrielle crush her enemies’ willpower before taking them down. 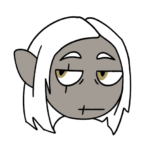 Somehow, Hemakshi and Salem seem to get along pretty well. Salem is also convinced that, without Hemakshi, Anjay would be dead by now! 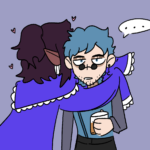 Anjay’s brother! Nisus helped Orev create the Gilded Talents, which Salem is obviously grateful for and is in no way jealous of how well the two of them work together.

Salem does not have a lot of experience with affection. As a child, they had people around who tried to foster relationships; but anyone who got close either vanished out of discomfort or met an unfortunate end.

Both of their parents died while Salem was very young (an unexplainable accident) which resulted in Salem floating between homes. They never settled long enough to form any meaningful relationships, and eventually took to the street after no longer wanting to be a burden on anyone.

After the creation of The Gilded Talents, Salem happily took their (self-appointed) position as Orev’s right-hand assistant. They do what they can, completing various missions to further the organization’s wealth and influence.

stalker’s tango
i know i’m always in your place, but don’t you see, my dear? i am your doppelganger

sweet talk
you could yell “piss off! won’t you stay away?” it’d still be sweet talk to my ears

private eyes
they’re watching you, they see your every move

puppet loosely strung
they just couldn’t see, that it was (you) needing (me), and not (me) needing (you)

obsessed with you
i’ve got a lock of your hair, i’m just a little bit insane

an unhealthy obsession
you’ve got those eyes that drive me crazy, and i’ve got eyes to watch you sleep

the mind electric
think of these thoughts as limitless light, exposing closing circuitry of fright

Orev gets a case of the hornies when Salem’s around – edison
salem, orev (nsfw)

How did it feel? – emi
salem, ceciare, kyrielle