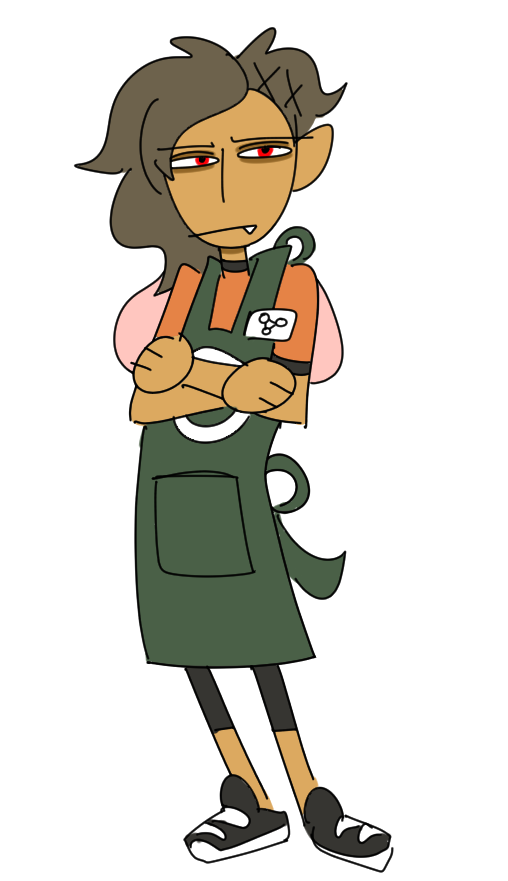 age 8: lemonade stand
built & started up their own lemonade stand. placed the stand outside the coliseum during events to compete with beverage sales … had to take it down within hours bc they didn’t have a permit to sell shit but like … everything thought it was adorable, really

age 13: first theme song
spinner posted a call-t0-action on the job boards looking to gather a group of ADVENTURERS to complete an IMPORTANT QUEST. like five other kids showed up, ready to do whatever they were told. spinner insisted on dividing them up by their skills in order to accomplish their task better. spinner realized they were okay at rallying a group of kids and making them feel important. they also wrote the group a theme song (their first!)

age 16: nothing strange here
watched one of the fights in the colosseum with their parents! it was really fun to watch, a little too gory but very thrilling. one of the fighters was a vampire! and their opponent actually put up a fight for once! spinner didn’t attend these t00 often, but were kinda special when he had time.

age 17: bubble tea shop
THEIR FIRST INTERVIEW … AND THEY TOTALLY BLEW IT!!!!!! this haunts them……they were so nervous over nailing it the person interviewing them actually laughed, like LAUGHED at them. this drove them to get spite-hired at one of their competitors’ shops & they’ve had a passion for coffee shop beverages ever since (and running their competitors into the ground)

age 20: freak fruit spinner accident
happened while on shift at the toy shop (second job). they don’t like to talk about it. (feel free to make something up or leave it up to ppl’s imagination)

age 21: 21st birthday
went out to a bar for their birthday, was trying to make a few bucks playing pool or cards for money, were pretending they weren’t that good at the game to get people to play against them, hustled some folks outta money, one dude got angry & almost violent when another patron stepped between them & scared the guy off, she offered to buy spinner a drink – (she’s a vampire & depending on how vampires are created in this universe a few things could happen here, i feel like she was on the hunt for new baby vamps & he was one she picked) – end result is spinner is a vampire BUT he rejected any help offered from the Family because they can do Just Fine On Their Own Thanks (after this they take a bit of a sick leave from work)

age 21: They Are Not Doing Fine On Their Own
it’s the middle of the night and spinner almost fuckin kills lady death cuz they suck at being a new vamp, turns it around and offers to supply them with blood so spinner doesn’t have to fucking eat people

age 22: first time harming someone On Purpose
some douchebag was making CLEARLY unwanted advances on one of the patrons at his bar (night job), had the dude escorted out but as he was being removed kept screaming really, really gross things, spinner was overtaken with like … the idea that they were supposed to do something about this. allowed to. like it was their right. duty? they don’t go all superhero but they do follow the guy out the bar, down an alley, & make him regret everything he said that night.

age 23: vamp fam round 2
after a close encounter with a city guard, spinner … coincidentally … gets a visit from the same vampire that initially turned them. they are offered, once again, protection and aid so long as spinner declares themself part of their organization and offers, what idk, like, work? manual labor? favors? anyway, spinner declines AGAIN because REALLY they’re doing JUST FINE. ON THEIR OWN. WITH THIS MESS. THANK YOU.

my art
my art
♫
♫
fanart
fanart