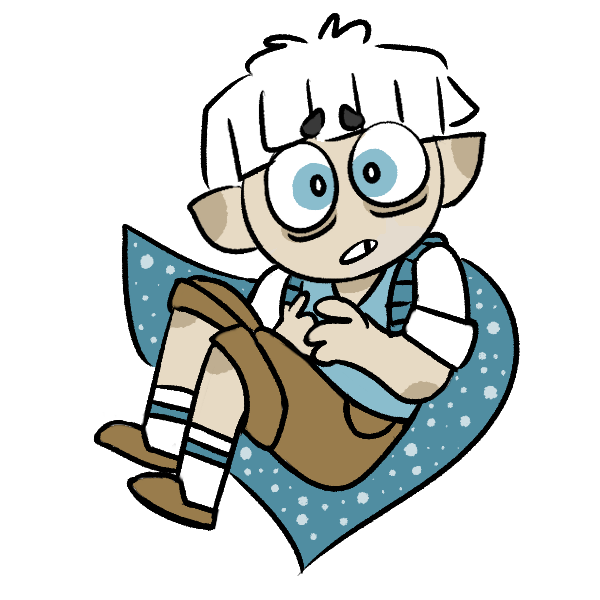 Nero is terrified of everything and desperately needs someone to tell him he did a good job!

A stickler for rules, he will not hesitate to report you to the authorities if caught breaking them. Luckily for everyone else, Nero’s observational skills aren’t the best and he can easily be tricked into believing most anything.

He’s a bit of a narrative punching bag – kidnapping, blackmail, slowly turning into a demon … Nero’s plan of living a perfectly boring life will never come to be. 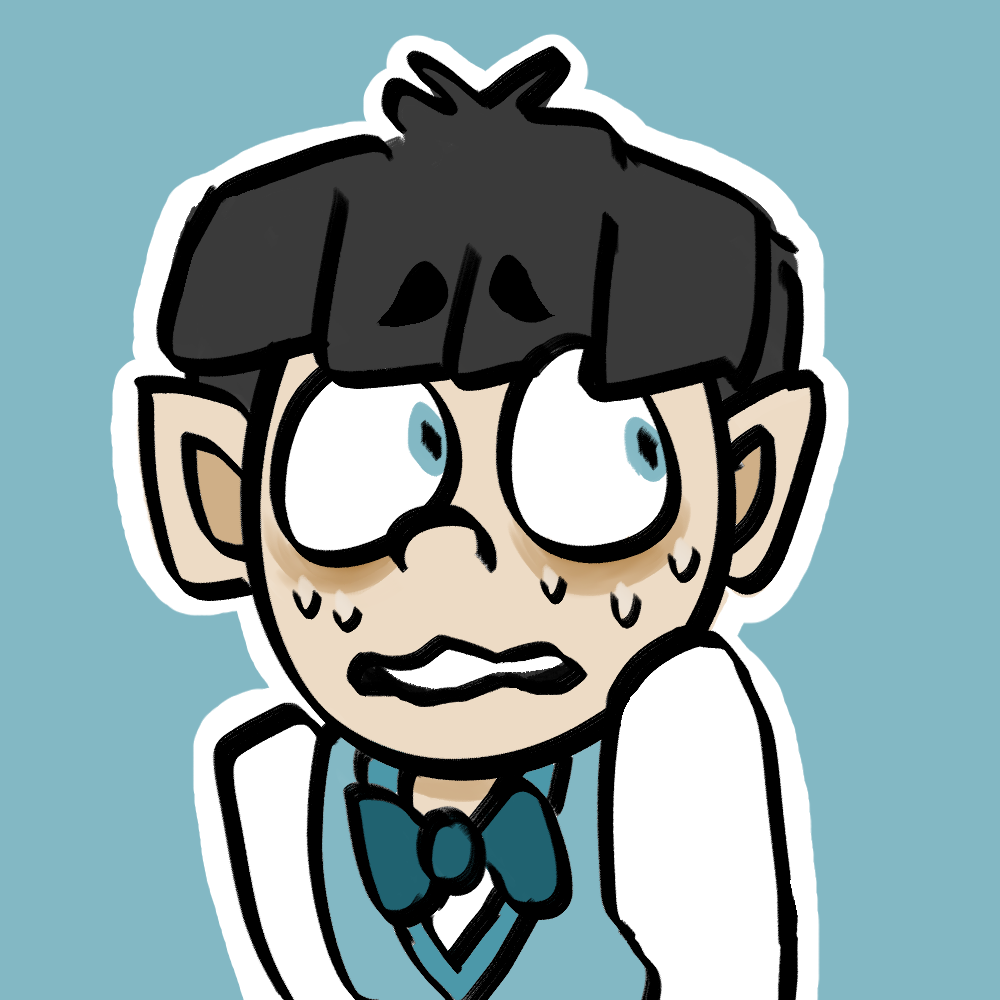 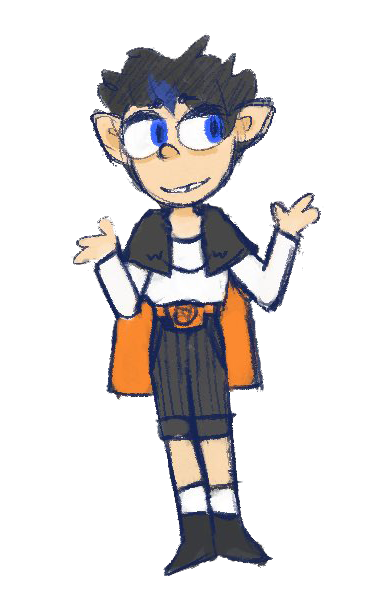 Nero is a lot of extremes rolled into one very unfortunate lad.

His loudest trait is his need for recognition. Nero was a gold star student who grew to be a gold star adult – he needs to be told he did a good job by every authority figure in the vicinity. This need has a tendency to blind him to those without his best interest in mind, making him very gullible so long as they have the credentials to back it up. Simply-put, Nero is a huge kiss-ass.

Working hand-in-hand with his perfection is Nero’s intense need for rules and order. Everything must be a Certain Way – he has set rules and conditions for what may seem like minor tasks, and becomes very upset when these are disturbed. (Many of Nero’s mannerisms can be linked to OCD.) This sometimes leads to Nero being very close-minded, insisting that his way of doing things is the only way and not leaving room for much else.

Nero is also a prude as well as a romantic. Sex before marriage scandalizes him, he doesn’t consider dating someone unless he plans to settle down, and he dreams of the perfect beachside cottage with a white picket fence for his future wife and two kids.

Something very specifically linked to the events prior to DNDASH is his paranoia. Following threats of blackmail, Nero became very paranoid and wary of just about everything and everyone. He had habits of accidentally casting spells when startled, assuming the worst out of situations, and generally being a jittery mess. This clashed with his usual blind trust of authority, creating lot of inner conflict.

Nero is average height and decent weight – one might refer to him as “soft,” having a few extra pounds thanks to his very comfortable upbringing. His face and features are round. He’s typically drawn with deep under-eye bags (it’s the trauma) and has a missing tooth (it’s the trauma). There is also a claw scar on his chest.

He’s a bowlcut boy! Sometimes with an undercut. His natural hair color is black, but he wears a ring that changes its color to white. Eventually this ring shorted-out, resulting in a black-to-white gradient. His eyebrows are very small and round.

He dresses like a good good dapper lad, favoring shorts and a bowtie. He loves blues and browns. Sometimes, he wears a brown paperboy cap made by his sister.

Partway through his adventures, Nero’s right arm became detached and afflicted with demonic energy. It emits eerie black smoke where it was severed, and has the ability to float away from Nero’s body, often against his command. Sometimes its nails are painted black. 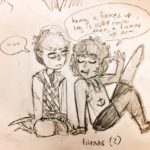 Elliot and Nero were known to butt heads quite a bit. Elliot found it too easy to wind Nero up, startling him when possible & bending the truth just to see how he would react. Nero was quick to insinuate he was better than Elliot in many different ways, often times targeting his intelligence or lack of social grace. 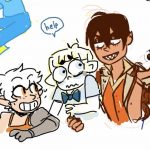 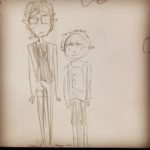 Toivo didn’t go to school for his wizarding abilities, like Nero did, which drives him a little crazy. 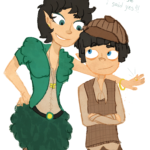 Hat-maker and fashionista. Auka can hold her alcohol and will not hesitate to punch you if you mess with her little brother. She will absolutely punch him, too. 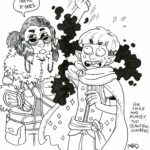 A little crazy. They dated briefly. Ironically, Nero only became interesting to Dmytro once Nero starting turning into a demon.

The group’s moral compass and pseudo-leader, Nero respected Julian and his decisions. He didn’t realize it, but Nero also had a bit of a crush on him. 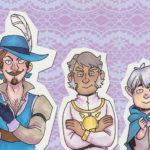 One time he stole money from someone’s tip jar … this can never be forgiven.

To Nero, family is everything.

He lived a very cookie-cutter upper-middle class life. He loved his sister, he loved his mom, he loved his dad. Nero was a straight A student, and his parents expected him to do great things.

As an adult, he attended Sibley’s School for the Gifted – a wizard school where he studied illusory magic. Illusions and special effects became his specialty, building upon a pre-existing knack for parlor tricks when putting on puppet shows for the local children.

One fateful day, Nero was snatched away while walking home for the evening. He was taken somewhere unfamiliar by an unknown group of people, and was given an ultimatum.

He was instructed to join the escort group in charge of bringing Prince Lesley to the neighboring kingdom so he could marry their princess and bring peace to the two kingdoms – except to specifically not let Prince Lesley reach his destination. It was implied that Nero’s family would be hurt if he did not comply.

Having assumed his only task was to prevent the prince from reaching his destination, Nero did all he could to hinder the group or break Lesley’s motivation to marrying the princess.

This was apparently not good enough, as one day Nero received a message delivered by hummingbird.

Your work thus far has been barely passable. Therefore the living conditions of your loved ones will be accurately equated to your work.

Nero’s mom. She wrote books about making your life easier (using magic in interesting ways, using certain herbs and spices medicinally, unique cookbooks, tips & tricks). At the time of his adventure, she was showing signs of sickness, but kept them hidden.

Nero’s dad. A banker (not top of the line, but one of the fairly important people at their town’s central bank). He has a grudge against their country’s politics.

Ciera had a crush on Nero when they were kids. When she confessed, he got super weird and stopped talking to her. What a dick!

Nero’s self-proclaimed rival. Has great hair. Is snippy. Nero never considered him a rival, which made him even angrier.

Tall and clumsy as HELL.

Nero’s favorite professor, they had an aunt/nephew sort of relationship.

STRENGTHS:
– VERY good at magic
– can sway people to see his side of the story

WEAKNESSES:
– do not ask him to do anything illegal